by WFP Admin added on 2 September 2015, Comments Off on The Longest (Almost) Mile , posted in Blog

As an icebreaker at our board meeting in June, we were asked to share what we would consider to be our theme song. Fortunately, I had a bit of time to think before I was put on the spot, and came up with Simon and Garfunkel’s “Feelin’ Groovy”.

Slow down, you move too fast.

You got to make the morning last.

Just kicking down the cobble stones.

Looking for fun and feelin’ groovy.

At the time, the first two lines were what triggered my selection of that song. I had been feeling that our summer had started off too hurried – too many places to go, too many appointments to keep. Too much rushing and not enough living. I needed the reminder to slow down and enjoy this summer and the gift of time I had with my children.

A couple weeks later, I found myself thinking of “Feelin’ Groovy” again, but this time it was the third and fourth lines that resonated with me. We were visiting Whistler and spent a lot of time walking on a lovely cobbled village stroll through the middle of town. For most of these walks, our daughter, Zoë (almost 2 at the time), usually preferred to be carried on daddy’s shoulders, or by me in a carrier. Then one evening, we were walking back to our rented home and she insisted on walking at her own pace. Those of you who have already passed through the toddler stage may recall that a toddler walking at their own pace usually entails one step back for every two forward, with sudden jags to explore a rock or a leaf on the path.

It was late, past the children’s bedtime, and my husband and I were both pretty worn out from a day of hiking in the hot weather. We just wanted to get home, so we went through some of the standard parent responses, “you have such a great view on daddy’s shoulders!” “how about a piggy back ride?”. It’s not that we wanted to ignore her wishes or independent spirit, but we were trying to balance that with what we felt everyone needed. Ever firm in her opinion, Zoë insisted that she wanted to walk. My husband and our son, Lucas, walked ahead on their own, while I hung back with Zoë and let her dictate our pace.

Over the next hour (and three-quarters of a mile), Zoë smelled almost every flower she could reach. She pointed out every dog that was being walked, and was offered the opportunity to pet most of them. She smiled and waved at people passing, and even attempted a conversation with an elderly gentleman with a bulbous nose and a cheery disposition. It only took a couple minutes of our walk for me to reframe my thinking from “wouldn’t it be nice to get home?” to one of amusement at watching Zoë explore and interact with her world. She was, in the words of Paul Simon “kicking down the cobble stones”.

Sure, we got home a lot later than we would have if we didn’t take the time to slow down. Then again, when we did (finally) get home, we were all more relaxed, and content than I know we would have been had we not stopped to smell flowers and pet dogs.

The memory of watching Zoë explore has had a more lasting effect on me than the lyrics of a ‘60’s folk rock song ever could (as much as I love Simon and Garfunkel), and I’ve continued on the path of slowing down whenever I can. It’s not always possible – sometimes we really need to go to pick up a child from a playdate, or make an appointment on time – but when you are able to slow down the rewards are well worth the effort. 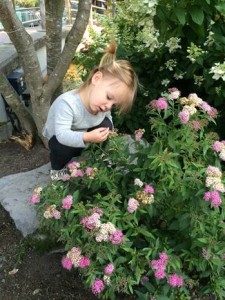 ← I Gave Away the Fun Part of Parenting to My Nanny
Reframing the Perfect Christmas, an Exercise in Letting Go →